Travel Writing piece written for an online travel agency, as part of the Professional Writing module.

Tucked away in northeast Europe, in the gulf of the Latvian coast lies the jewel of the Baltics. A country covering only 64 thousand square metres, has 2 million patriotic citizens with a rich cultural history they proudly showcase. With history and traditions that stretch from the 9th Century AD, and a language that can be traced back to 3500 BC, it is a fascinating place to visit.

Before you book tickets, however, here are a few things you should know: half of the land territory is covered by forest, and the rest is farmland, coastline and cities. While the weather usually drops below 0° Celsius during the winter and the ground is covered by a soft layer of snow. In the summers, the weather is warm, and perfect for spending days by the coast.

The capital, Riga, is a booming hub of creativity. From clubs with weekly nights, to poetry slams, stand-up comedy evenings and new theatre productions monthly, to the Song and Dance Festival that happens every five years. No matter which neighbourhood you’re visiting, there will always be something going on and plenty of opportunities to get involved with the local culture. If it’s your first time, make sure you see the Freedom Monument in the centre and the Old Town. They are classic archetypes of Latvian culture and history.

There are a lot of attractions in other parts of the country as well. In the most southern part, you can find the museum of Mark Rothko, the abstract expressionist who hails from Latvia. In the north, during the summers you can go to the biggest music festival in Latvia Positivus, visit the Sigulda castle or the bobsleigh, luge and skeleton track where Winter Olympic medallists train. In the midcountry, you can see the Mitava Palace and Rundale Palace, the largest Baroque-style buildings in the Baltics, which were used as the summer homes for the Russian royal family in the early 19th century. In the east, you can visit many great fisherman’s villages, as well as the widest waterfall in Europe that happens to be located in Kuldiga.

If you’re coming in the summer seasons, try to book your vacation in time for the Midsummer’s celebrations. It’s when Latvians come together to celebrate the shortest night of the year. Traditional ways of celebrating include going out to the countryside, staying up until the sun rises and singing folk songs. Most people dress in traditional costumes signifying which town they are from. On the way to the countryside, people stop by fields to pick wildflowers which the women later make into fresh flower crowns. As the festivities continue, people eat traditional meat pies called pīrāgi, drink beer, and when it gets cold and dark enough, they jump over fire to ensure good luck in the next year.

In the autumn, you get to see the leaves change colour, which is called the Golden Autumn in Latvia. In September, the Ministry of Culture organise a National Poetry week to keep Latvians interested in the people who are cultivating the culture during modern times. However, if you visit during November, you could make it to the Independence Day celebrations. On the 11th of November, Lāčplēša diena (Bearslayer day) is celebrated to remember the soldiers who fought for the independence of Latvia and it’s named after a folk epic. On the 18th of November, Latvians celebrate their Independence Day. During the week between the two events, there are fireworks along the Daugava river in Riga, as well as a night time light festival that projects art onto buildings all over the city. 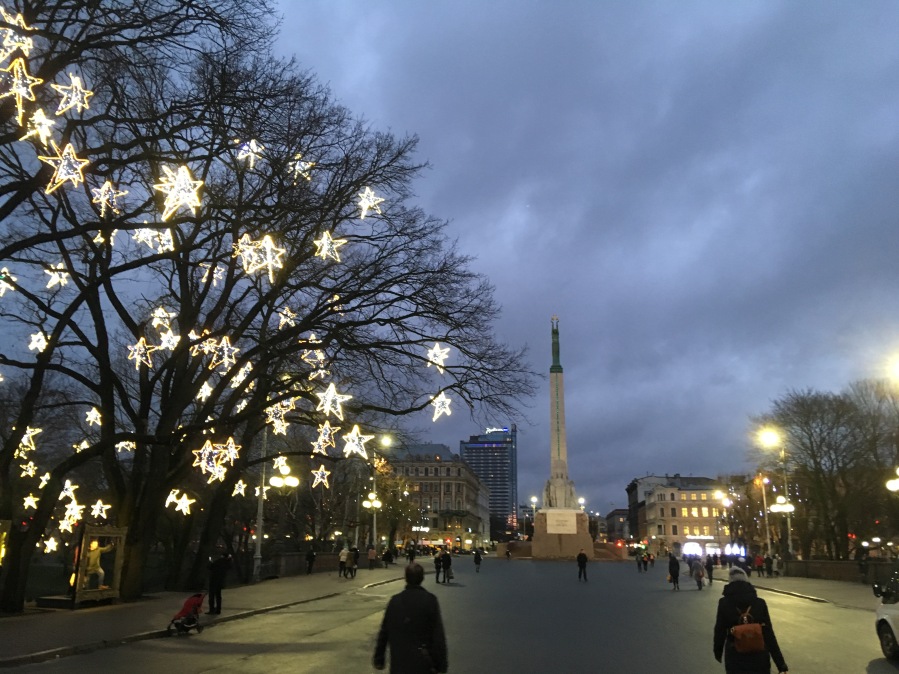 During winter, there is a Christmas market filled with stalls of food and trinkets made in Latvia. With many things that either have the national colours on them or are engraved with the national symbols, it would make a great souvenir to remind you of your trip or to tempt someone else to take one.

No matter when you come to Latvia, we can promise that you’ll have a great time, you’ll get to experience a whole new culture that is eager to welcome you, try some new food or drinks and you might learn something new along the way. For now, as we say in Latvia – Priekā!